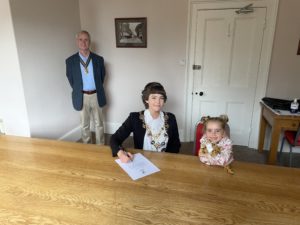 “As Mayor of Hythe I was delighted and honoured to sign the Armed Forces Covenant on behalf of the Town. Hythe has a long and illustrious history in supporting our Armed Forces which continues to this day”, said Cllr. Naomi Slade.

Hythe Town Council has since been awarded the bronze award from the Defence Employer Recognition Scheme (ERS).

The ERS recognises commitment and support from UK employers for defence personnel. The scheme comprises bronze, silver and gold awards for employers who support those who serve or have served in the Armed Forces, and their families.