This is the largest project undertaken by the members and exceeded expectations with all 250 copies sold! Profits from the book were donated equally between ‘Hythe Dementia Awareness Forum’ and ‘Pilgrims Hospice’ during the Club’s Annual Review meeting on the 9th December.

The club wishes to thank the Mayor of Hythe, the Rotary Club of Hythe, Hythe Life Magazine, Hythe TED, local businesses and organisations that undertook book sales and promotion and especially everyone who bought the book!

[Photographs below by Stewart Weller]

An online exhibition can be viewed on the Club’s website at: https://hythedistrictphotographicclub.jimdo.com/august-in-hythe-2021/

Hythe Town Council have placed a signed copy of the book in the Hythe Museum for anyone who wishes to look. 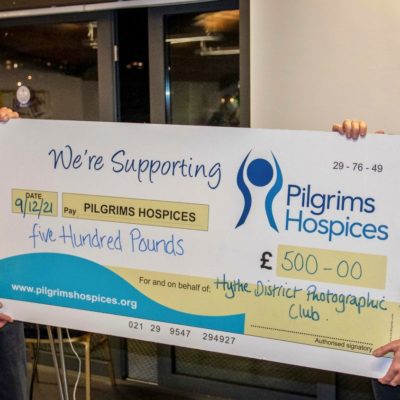