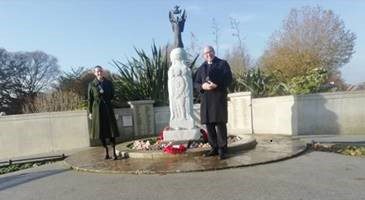 Remembrance Sunday is held at the War Memorial in Hythe to commemorate the contribution of British and Commonwealth military and civilian servicemen and women in the two World Wars and later conflicts.  It is held at 11am on the second Sunday in November (the Sunday nearest to 11 November, Armistice Day, the anniversary of the end of hostilities in the First World War in 1918).

We sadly had to cancel our traditional Remembrance Sunday service this year, but our main priority was to keep our residents safe.  Along with our neighbouring councils the Mayor chose an earlier and much quieter time in the morning to pay her respects at the Town Council’s War Memorial, accompanied by her chaplain, Callum McKenna.